In April of 2016, Mark McCawley, editor of Urban Grafitti, passed into the ether. RIP – I miss him. Problem is he brought the UG archives along with him. So I have resubmitted  this story in September and it was published by the Amsterdam Quarterly.

The decline of my mother, now 93 on 14 May, has been a slow, long descent since I was a teen. But when does a life suddenly become less a tragic testimony to survival and more of a burden – you are not sitting around waiting or hoping she dies but then again there is the tick of a clock, and discussions arise about what dignity is and what the purpose of mere longevity ... Continued at Amsterdam Quarterly #23 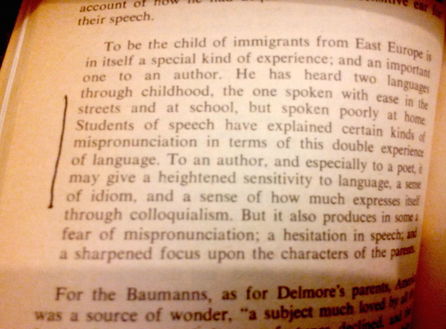 To be the child of immigrants ... is in itself a special kind of experience; and an important one to an author. He has heard two languages through childhood, the one spoken with ease in the streets and at school, but spoken poorly at home. Students of speech have explained certain kinds of mispronunciation in terms of this double experience of language. To an author, and especially to a poet, it may give a heightened sensitivity to language, a sense of idiom, and a sense of how much expresses itself through colloquialism. But it also produces in some a fear of mispronunciation; a hesitation in speech; and sharpened focus upon the characters of the parents.
• Delmore Schwartz, In Dreams Begin Responsibilities and Other Stories

There was an extraordinary silence, where memories seemed to create entire holographic films starring my father and we were both watching this movie. … That my mother could talk forever about nothing but almost never about something was also part of the conundrum. My father had “disappeared” during WWII and never really reappeared – if you know what I mean. He was an engineer and worked everyday and brought home presents and yet, he was never there, always deep in thought, deep in books about certain WWII details, the “World at War” on TV.
As she climbed into her Honda Civic I noticed for the first time her swollen ankles, the blossoms of varicose veins on the backs of her calves. The climb into the front seat was one serenaded by an amazing tragic stillness. It brought back the stories of her deprivations during the Big War. From the black-and-white photos it was obvious she had had perfect slender legs once and a smile that glowed. And now the way she hunched over ever so slightly like she’s beginning to curl back up into the spiraling cocoon. The way each memory remembered with such authority was meant as testimony to her infallibility and immortality. It actually performed just the opposite: You became aware that each memory was flawed or a necessary rewritten fiction like the teenager who brags about his sex life to hide the fact that he is a premature ejaculator.

The way she held the top of the steering wheel as tightly as ever. Here eyes straining just above the wheel’s upper curve. Her knuckles turning white. Holding on for dear life. Just sitting there. “OK, mom, put’r in drive already.” I whisper. Just before she pulled out into traffic I saw her reach into her tote bag and place the Tupperware container with my father’s ashes on the passenger seat next to her.
Google analytics tracking code