Unbearables: Co-edited the anthology of adventurous Unbearable writings, Autonomedia with Peter lamborn Wilson, Mike golden, Ron Kolm. I contributed a  experiment in comic book sci-fi called "2-B 38-C 3-D in Neuropolis" Included almost ALL of the Unbearables at the time & many allies including: Max Blagg, Lydia tomkiw, Lisa "Bikini Girl" Herskowitz, David Rattray, Bruce Benderson, Little Annie Anxiety, Dave Mandl, Jose Padua and all of the original members. And amazing collection of graphics by Yossarian, Chris Potash, J.D. King, among others ...
Culture of Narcolepsy, ValBar, 1984, price €1250.69 Produced by Valbar, employing the philosophy of “creative leisure combats work” and sponsored by the “New Jersey Zen Housewives” we get the collaborative romantic contentiousness of Valerie Haller & bart plantenga, taking on the world to “fight paralysis” and join a real “Marxist Computer Slimdown Kamp” read a “real” marriage announcement for the New York Times, the confessional “The Making of a Misanthrope” and celebrate as “5 New Countries Join the Capitalist Bloc” inc. Lacosterica and Playbowana.
Bardor Productions Was mainly a project that erupted spontaneously from the needs and minds of bart plantenga and Theo Dorian and, in the beginning, poet Su Byron, along with a cute and cuddly cadre of assistants-friends-lovers, in our HQ-cum-oversized-broom-closet at Bleecker and McDougal [back when rents did not go for 2 arms and 2 legs]. Among this cadre were some who worked in copyshops and were able to clandestinely slip our zine into gratis production – drastically cutting production costs. We sold our zines at various indie bookstores including Sohozat, Eastside Books, St. Marks, Gotham Bookmart and Printed Matter [But also in Amsterdam, London, Paris, San Francisco and Albany]. When some of these local outlets steadfastly "neglected" to pay us for actual sales, we turned to that age-old DIY trick of stealing back your own magazines to up sales and render some measure of revenge, the revenge of the powerless DIYer. As of today, I still have a receipt somewhere for issues sold at Gotham Bookmart and I always meant to go back and collect our $40+. Nice #4 was also sold in some record stores like 99 Records on McDougal Street in NY [best sales and Ed Bahlman always paid]. 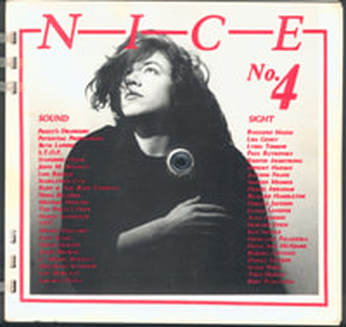