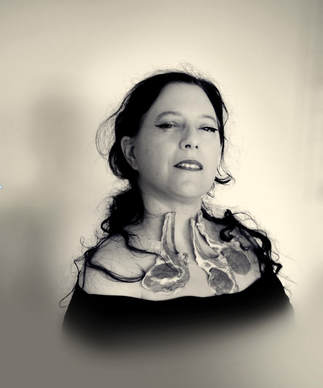 Erika Stucky: Too Far Is Never Far Enough For This Multi-Talent by bart plantenga
A translation from the Dutch version that appeared in Gonzo Circus  // Dutch  //  English
Erika Stucky is a brave musician. A Swiss gal born and raised in San Francisco in the halcyon days of hippie free expression she grew unafraid of casting off her roots in order to redefine them on her own terms. Originality and inspiration makes one fearless no doubt. She’s not afraid of a laugh; her concerts are laced with her irrepressible sense of Dadaistic humor (a la Beefheart and Zappa) in her pursuit of serious music.

It’s clear that she’s never known a border that wasn’t worth crossing. We’ll be thankful too, as she shows us precisely what it means to free ourselves from presumption and cliché – be it about the much maligned yodel or cringe-worthy earworms (“Roxanne”).  You’ll no doubt be forever grateful that she showed you the forgotten magic of these tunes.

In that spirit, listening to a variety of her material, in preparing my radio show Wreck Erika Stucky 1220, I was impressed by her dogged pursuit of challenges, an intrepid if sometimes delirious [and humorous] search for those boundaries between kitsch, pop, and experimentation.

Genre-mangler Tom Waits and jazz adventuress Carla Bley came to mind – and I told her so. Her response was a link to her appearance in Carla Bley’s opera “Escalator Over The Hill,  and her participation in the recent project “Raindogs Revisited” put together by David Coulter (Pogues) which also features Steve Nieve (Elvis Costello), St. Vincent, Tiger Lillies, and Jane Birkin, among others, interpreting this ambitious Tom Waits album.

This confirmed my long-held belief that Erika is indeed a kind of European female Tom Waits – especially in their organic and rambunctious use of multimedia and multiple musical styles. By the end of the day I had to ask myself: How did I miss “Raindogs Revisited” –  Birkin and Stucky on the same stage!?

Her career has been one enthusiastic investigation of pop culture through interpretations and cover versions: not so much to destroy as to take apart and reassemble to rediscover their magic in a singular inimitable style the songs of Prince, Patsy Cline, Aerosmith, Randy Newman, the Police, Bob Dylan, Michael Jackson, Ellington, Elvis, Procol Harum, Nirvana, Queen, Beatles, Fats Domino or a popular Mariachi standard – leading her audience into a urinoir to listen to her impromptu version of  “I Heard it Through the Grapevine” at the Jazzahead festival highlights her impecable spontaneity. Her covers always come across with humor but also the passion of an adoring fan.

I learned to love her in 2001 while writing the first of my two yodel books  YODEL-AY-EE-OOOO: The Secret History of Yodeling Around the World and Yodel in HiFi: From Kitsch Folk to Contemporary Electronica. She managed to confiscate the yodel from the traditionalists, send it for a spin, and cast it far beyond the limits of cliché and tradition. This is evident in her groundbreaking album, Suicidal Yodels, with the Young Gods, which presents the melancholic side of (Swiss) yodeling – Swiss blues – as recorded in outdoor settings such as a train station.

this is further evident in the excellent yodeling documentary Heimatklänge by Stefan Schwittert where Stucky, nature yodeler Noldi Alder and experimental vocalist Christian Zehnder (Stimmhorn) make a case for rehabilitating the yodel, taking it back for art and soul what had been purloined by dubious cultural representatives for far too long. The only advice when witnessing Erika Stucky live: check your cultural and aesthetic prejudices in the garderobe [cloakroom / coat check].